This originally appeared on www.talesofmiddleearth.co.uk back in 2016

The woods on either side became denser; the trees were now younger and thicker; and as the lane went lower, running down into a fold of the hills, there were many deep brakes of hazel on the rising slopes at either hand. At last the Elves turned aside from the path. A green ride lay almost unseen through the thickets on the right; and this they followed as it wound away back up the wooded slopes on to the top of a shoulder of the hills that stood out into the lower land of the river-valley. Suddenly they came out of the shadow of the trees, and before them lay a wide space of grass, grey under the night. On three sides the woods pressed upon it; but eastward the ground fell steeply and the tops of the dark trees, growing at the bottom of the slope, were below their feet. Beyond, the low lands lay dim and flat under the stars. Nearer at hand a few lights twinkled in the village of Woodhall.

You have build your terrain and set your gaming board up and are ready to play but it still does not look quite as good as you want to, it is looking a bit flat and something is missing but you can not quite put your finger on what. In this case you probably want to add scenic detailing. These are small things you can add to the table top that will not affect the layout or game that much but will add a lot of visual flare. 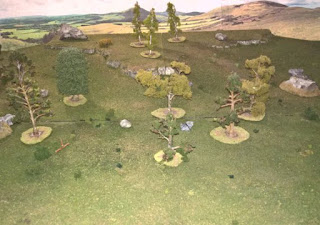 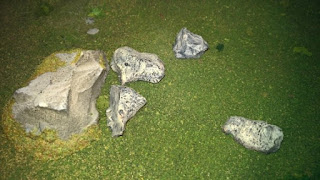 Sometimes even if a scenario doesn't for trees adding some can bring life to your board. Individually based trees don't have to count as difficult terrain and will not affect the game too much.

You need to pick which kind of tree you need to use. There are kit based ones that you glue the foliage to the branches yourself, or premade ones which are ready to go out of the box. Kit based trees are normally cheaper than ready made ones but not normally as hard wearing.

You may need to paint the trunks and branches of your trees if you use a kit tree as they normally come in a flat dark brown. Base coat in Rhinox Hide and then avoid using light browns such as Mourngfang. Drybrush using Steel Legion Drab or Dawnstone. Use a watered down amount of Elysian Green and apply in patches around the trunks. This represents and mould and moss that has grown on the trunk. 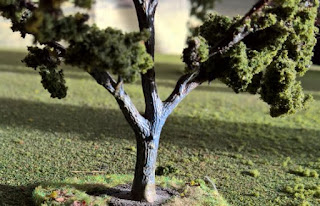 Glue the tree to a disc of thick cardboard that radius should not be greater than the foliage of the tree itself.  Cover the base in PVA and then add modelling sand. Once dry undercoat in Abaddon Black then basecoat in Rhinox Hide before drybrushing in Steel Legion Drab.

If you look at where an individual tree grows in a grassy area you will notice that the area around the trunk where the roots are underneath is bereft of grass, leaving a earthy patch.  A lot of wargamers and terrain makers miss this aspect out when basing trees and add static grass right up to the trunk of the tree. 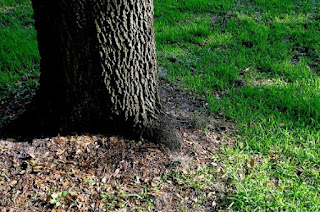 Cover the base in PVA again but leave a patch around the trunk of the tree. Sprinkle over grass flock and static grass so it blends in with your gaming board. Also glue some dead leaf scatter around the base of the tree. 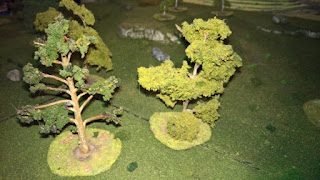 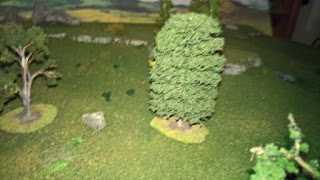 For me this is the thing to really make the board look more interesting. With out this it always looks flat and clean.  This is quick to set up but a bit of a pain to clear away.

I have a tub that is filled with small bits of clump foliage and lichen. This is seen scattered all over the board. It is as simple as that! 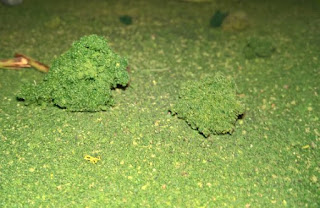 Logs can be represented by using twigs found in your garden. Use a watered down amount of Elysian Green and apply in patches around the twig. This represents and mould and moss that has grown on the log. 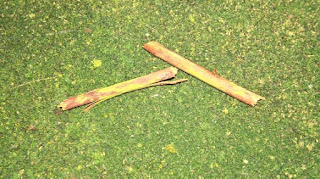 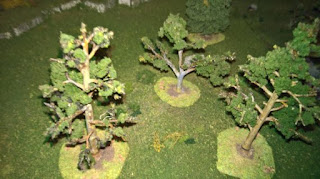 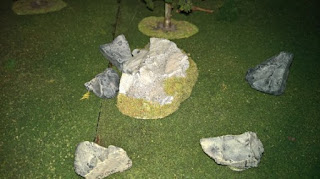 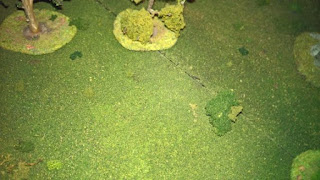 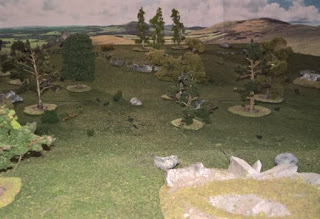