Welcome to the second part of the building Helm's Deep guide. If you missed the first part you can read it here. This issue covers making the inner wall and the courtyard area. As with the first part, this guide is not about making an exact scale replica. It is about making a piece of terrain that is recognisable as Helm's Deep and plays well.

The first thing to do is decide on scale. I wanted to make mine so that the distant between in outer wall and inner wall was big enough to place two cavalry base side by side. To this end I decide to make the radius of the inner wall 9". I then decided on heights. The height up to the courtyard floor would be about 4 1/2". The inner wall would then carry on another 2 1/2" with a 1" parapet. This would make the other height on the inner wall from the front about 8". The inner wall and courtyard's basic shape consists of a semi circle. As I only had a small hand held wire cutter I had to make it out of several thinner pieces and glue them together. If you have a large desk mounted wire cutter you could probably make it out of one piece. 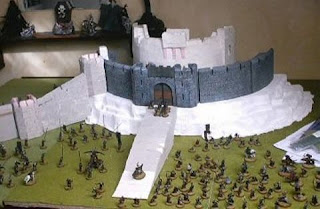 Take a sheet of 2" thick polystyrene and mark out an 8" radius semicircle. To do this draw a horizontal line that is 9" away from the edge and 18" wide. find the centre of this line. Find an old scrap piece of card that is about 10 - 11" long. about 1/2" away from one edge push a biro pen through. From where the nip of the pen is measure 9" down the card. At this point cut a small hole that will be big enough to put a marker pen nip in. Place the biro pen nip on to the centre mark on the polystyrene. Push firmly in place. Put the marker pen in the other end and holding the biro pen firmly in place draw an arc from one side of the line to another. 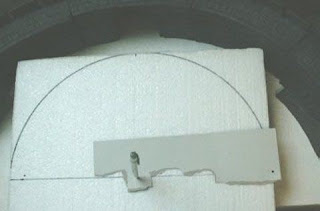 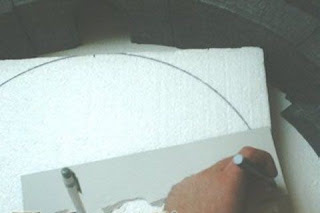 You now have a 9" radius semi circle mark out. This can be cut out using the hot wire cutter. Being that the height was decided to be 41/2" you will need to cut out another two pieces exactly the same shape and size from a 2" sheet and a 1/2" sheet of polystyrene. These can be glued together using PVA.

The inner wall extends another 2 1/2" above the courtyard. You can make this using the same technique as above. Except instead of being a semi circle this needs to be a semi ring. Before you have cut the semi circle out, draw another circle that is 6 1/2" radius. Cut this out so that you have half a doughnut shape. Another one of exact shape and size needs to be cut out from 1/2" polystyrene. Before attaching this to the piece made in step one consideration needs to be given to the archway and slope. These are found on the back of the left hand side of the courtyard if you are looking face on. The slope needs to be cut from the courtyard area, that is 2 1/2" inches wide, and comes in from the outside edge abut 5". Again these are just the measurements that I use and are no way accurate to the movie. Cut an archway that will go over the slope from the piece you have just made from this step. If you put them both together you will notice a missing piece that should go from the arch down to the slope. This can be replaced from a 1/2" thick piece of polystyrene.

Put the courtyard in place where it will go in the other all finished fortress. Place the outer wall in place too. Looking face on, towards the right hand side there is a crossing from the outer wall to the inner wall and a doorway. Decide where this is going to go. In the area where I wanted mine there was a stairway going up the outer wall so I took mine from the top of the stairway. This doorway now needs to be marked out. It should be wide enough to allow 1 small base to be placed inside. The height of it is 1 3/4" inches with an arched on top. Cut his out using the hot wire cutter.

Glue all the pieces together with PVA.

Next we need to make the raised areas around the top of the inner wall. There are three of these. One on the centre, one to the right and one to the left. For the centre steps take a piece of polystyrene that is 2" wide, 3 1/2" long and 1 1/2" thick. It needs to be curved slightly, and needs to be the same curve as the wall. At each end come in about an inch and draw a line down. Then mark two lines evenly spaced in the two areas. See the diagram below which is a plan of the shaped and marked areas. NB: The diagrams below do not show the curve. 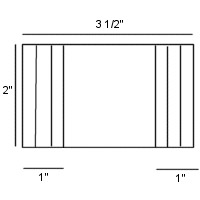 Cut out the marked lines as steps leading down from the top either side. Next two 1/2" by 1/2" squares need to be removed from the front of either side. See the diagram below. 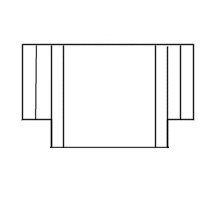 Next a 'C' shape needs to be made from 1/2" thick polystyrene. Cut a shape that is 3 1/2" long and 2 1/2" wide and two shapes 1 1/4" long and 2 1/2" wide. Glue them together so that the shorter pieces are attached at either end of the longer bit. This should slot onto the front of the stairway piece: 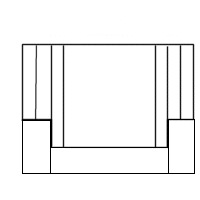 Now cut a piece that is 2 1/2" wide and 5" high from the 1/2" polystyrene. Glue the stairs onto place on the centre of the upper wall. Glue the 'C' onto place. The shape that has just been made is placed going from the floor of the courtyard going up the back of the wall.

Taking some pink insulating foam, cut three shapes. These should be 2" long, 1/2" wide and 1/2" thick at the top going down to nothing at the bottom forming a wedge shape: 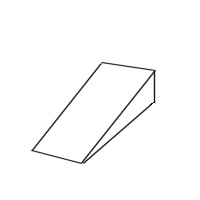 Glue these, evenly spaced underneath the 'C' along the front of the inner wall.

Next we will make the raised area on the right hand side (the one above the archway door). This is made using the same techniques as above. The front of the 'C' extends all the way down the front of the wall, so instead of using polystyrene I made it out of 1/4" thick 3"wide balsa wood. The archway door also needs to be cut out of the balsa wood. Once it has all been glued in place and dried, the parapet parts needs detailing. See the first guide on how to do this. 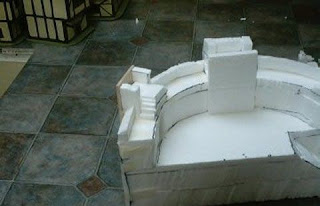 The raised area on the left is a slightly different shape in that it is a set up steps leading up to an entrance in the side of the mountains. So make these steps go up higher than the other two, say about 2". There are walls in front and behind these steps. Use the internet and books to find as many reference pictures as possible on how these steps should look. 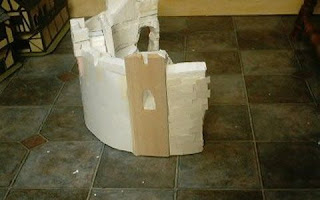 Now that all three raised areas have been built we can make the parapet that runs in between them. Use the technique for making curved wall sections from above and make it 1/2" wide and 1" high. Angle it off using techniques from part one. Looking at pictures of this parapet you will notice that it is damaged in various places. To achieve this effect, take the hot wire cutter and remove various chunks from the parapet. 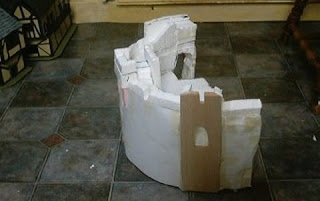 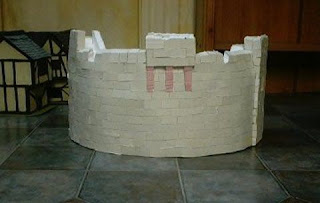 A set of steps needs to be made so that you can get from the courtyard to the top of the wall. This made from polystyrene with the same curvature as the wall. It is about an inch wide and tall enough to reach the walkway on the wall. 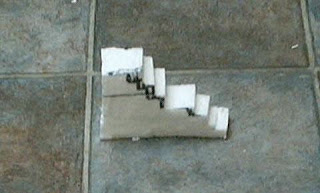 I would say that this part is the hardest to do. I have glossed over many details. I present here manly the techniques on how to do rather than an exact what to do. I would recommend making it to you own personal preferences and use the internet and books as reference.
Posted by TomeTabletopGaming at 14:26