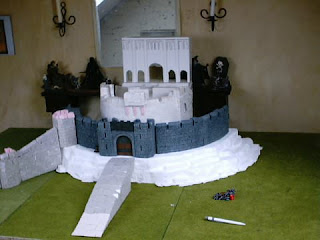 Cut two rectangles from the Foam board One rectangle should be about 3 1/4" by 2 1/4" and the other one about 3 1/4" by 4". As always these measurements will depend on the size of your Helm's Deep and the scales you have decided upon. Glue these to pieces together at right angles so you form an 'L' shape.

Cut another two rectangles out of the Foam board both at 3 1/4" high, one being 4" long and the other 5". Glue these together in the same manor as above. 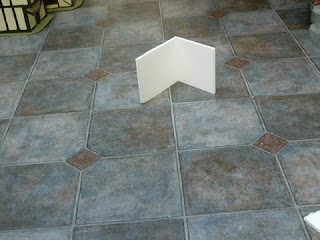 All three parts need to be glued together. Take part 1 (the first 'L' shape) and glue part 3 (the steps) along the 4" side. The steps will no go all the way to the top but about 1 1/4" below. Now glue part 2 to the other side. Look at the following picture for more help. 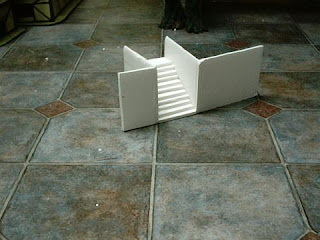 From a sheet of 2" thick Polystyrene cut a rectangle that is 15" by 11 1/2". This will then need to be cut in to shape using the diagram below. The 4" area removed from the front is where eventually the stairs made in Step 1 will fit so make sure they do. The area on the left hand side looking at the diagram below will meet up with the walkway on the courtyard make in Part Two of this series so make sure that matches up as well. The angle part will fit in by the slope of the courtyard. 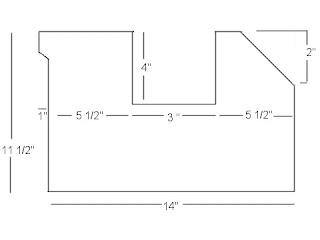 From Foam board cut three rectangles all 14" long. Their widths should be 5 3/4", 5 1/2", and 4 3/4". Glue these together with the largest at the bottom and the smallest at the top. They should be flush at the back and stepped at the front. Glue this to the back of the polystyrene shape you just cut from above. 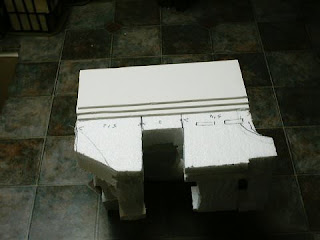 The part you have just constructed needs to be raised so that it fits over the courtyard and the courtyard walkway and this floor area meet up. You could make more of these shapes from polystyrene until it is of the desired height, but I found this to be wasteful. What I did was to construct pillars of the required height from off cuts of polystyrene. These were then glued underneath. 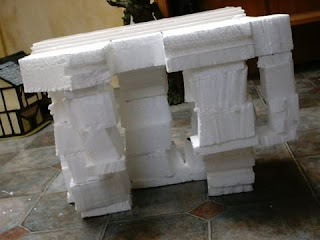 Next from Foam board cut four rectangles. One of these needs to be 9" by 24", this will be the front. Two need to be 9" by 3 1/4", these are the sides and the final piece will be the roof and needs to be 3 1/2" by 14". Taking the front piece, five archways need to be cut from it. There is one large archway in the middle and two smaller ones either side. The largest arch should be about 3" wide and 4" tall. The four smaller ones should be about 1 1/2" wide and 2 1/2" tall. There should be a 1" gap between the arches expect for the edges were there will probably only be about a 1/2" gap. See the diagram below for more details. 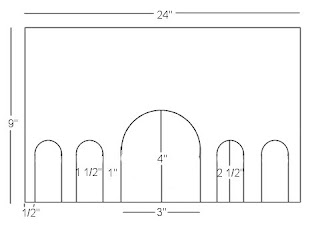 Assembly as the pieces together so that you have a box shape. For extra strength triangle supports can be glued to the inside: 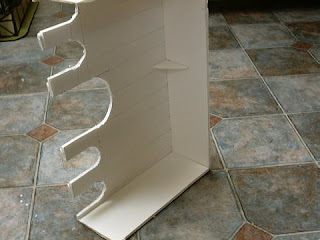 From Foam board cut a rectangle strip that is 1/2" wide and 24" long. Glue this to along the top of the front. Cut four more strips that are 1/2" wide. These will run down in between the arches so make the length of them to fit. Glue these in place. At the top part of the front, in between these columns you have just made some detailing needs to be done. If you are feeling adventurous you can take it a step further, look at pictures on the net and books and make the detail more authentic. I have opted to make mine look familiar while not totally accurate. From thin cardboard cut four rectangles about 2" by 2" and one 2" by 3 1/2". Again these measurements may not be correct for you model, make sure these pieces fit in between the columns.
From the 2 by 2 squares make out two "half sausage" shapes, say about 1/2" wide and 1 1/2" tall and evenly space them. On the larger piece of card make out four of these sausage shapes and cut them all out. Glue all five pieces of card in place.

As I said earlier this is in no way an accurate detail but more of a representation of it. You can take this a step further to make it more complete. This can now be glued at the back of the steps on the floor piece made earlier

Place the piece in position with the rest of Helm's Deep built so far. You will notice that the slope area needs some attention. First the angled section of wall needs to be built. Measure up the required sizes. Mine was 4" by 7" and cut this from Foam board Glue in place. Next the slope of the courtyard needs to be extended. This can either be made from Foam board or thin cardboard. You will need to look and measure what size and shape this needs to be. Cut and glue this in place. Also if you haven't done so, the steps made earlier can be glued into place. 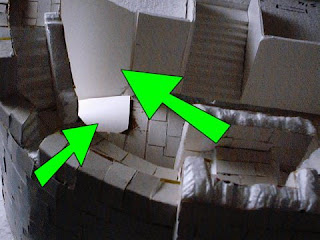 Almost done now, all that is left to do is cover the floor and front walls in thin card block blocks as in earlier parts. These blocks should be about 3/4" by 1 1/4". Where this part meets up with other already blocked parts make sure the blocks match up. 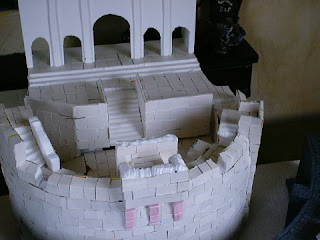 That's all there is to this part. Next part covers the mountain side and the Hornburg.
Posted by TomeTabletopGaming at 14:30