This part of the series will take you through creating the mountain side and the Hornberg tower. I had originally planned to make the Hornberg in an earlier stage but left it until this one so I could see where it would fit in to the mountain. It was only after finishing this part that I could really see Helm's Deep coming together, which is a good ting too as there is only one more part to go after this.

NOTE: Unfortunately this part first appeared on The Last Alliance and most of the pictures have been lost, if any one took a copy of it and  has the pictures saved I would be most grateful for them.

Take the boarding and place it behind everything set up so far. Above I have given a choice of boarding's. I decided to use chip board as it was lighter than all of the others. Draw an outline of the mountain shape you are after. This is a person preference. One thing to keep in mind is the positioning of the Hornberg. Think about where that goes and give enough mountain to house it. While the board is in place also draw around the hall back so you can replace the mountain in the same place. 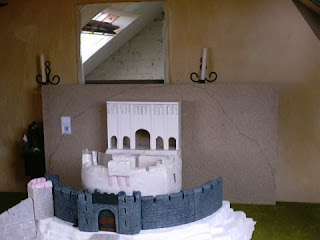 Using something like a jigsaw cut around the line and put back in place using the outline of the hall as a guide to position it correctly.

Using cut sheets of cut to shape polystyrene, begin to place them on the mountain. These will form the contours of the mountain size. There is no correct measurement and is again up to personal taste bearing in mind the Hornberg. I began on the left hand side as this will be the simplest to construct. On the right hand side glue a piece of 1/2" thick polystyrene in between the back board and the cliff (made in part one). This will be used to glue the Hornberg construction to.

The Hornberg is positioned on the right hand side and is made from a long cardboard tube. The circumference of the one I used was about 7" but use whatever you can find. To give it some extra height and a base to rest on, two 2" blocks of polystyrene were glued in place on the 1/2" polystyrene.

Taking another block of 2" polystyrene, draw around the tube and cut out the circle. You may need to cut this block down the middle, cut the now semi circle from each one and then glue the two bits back together again. Glue this in place on top of the two other blocks. This will be used to help keep the Hornberg in place.

Continue building up the contours.

You will need to see where the contours need to go, and what shape and size they need to be. This is the reason why this part is done with the Helm's Deep built so far set up in place.

Using a combination of glue and making tape attached screwed up sheets of newspaper in between the contours. Make sure these are firmly in place as they will act as the shape of the mountain side.

Pay attention to the Hornberg area. Continue in this manor until you have covered the entire mountain with newspaper.

Take sheets of tissue paper and place on the mountain side. Brush this with watered down PVA. Cover the entire mountain in this manner. When the tissue paper gets wet and dries out it made a nice rocky texture and gives a good level of hardness. Once covered allow to dry for about 24 hours and apply a second covering. As also pay attention to the Hornberg slot.

Place the tube you are going to use as the Hornberg into the slot. Mark the front on it and then draw an outline around the bottom of it where it meets the mountain side.

Folded pieces of card are used to construct the fins. These should be 1 3/4" at the top and run out to about 2" at the bottom. They should have the same angled top as the foam board parts made in step 7. They all start 6" from the top of the foam board (roughly 9" from the top of the tube) and should be the same length as the mountain side marker for that fin. Use the foam board pieces to glue the folded card to. Addition glue can be applied to the card edge so it is glued to the tube too. You may need to snip some corners here and there to make it fit comfortably in the mountain slot. 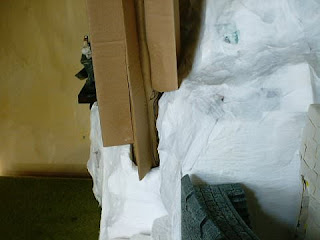 In the section in between the front fin and the fin to the left a horn needs to be made. Cut a piece of thin card 2 1/2" by 1 1/4".This will need to have a slight fold in it running down the middle. Glue this in place so that its bottom is placed where the card fin starts. Make another piece from thin card. This should be 7 1/2" long. its wide at the top should be 1 1/4" and its wide at the bottom 1 3/4". It should look like a triangle with its top cut off. Again this will need to be folded slightly down the middle.Glue this in place starting underneath the previously glued piece of card.

In the section on the left hand side. repeat this process.

Place the tube in place and make any adjustments to it or the mountain as necessary.
Posted by TomeTabletopGaming at 14:34