At last they came to a narrow gate in a thick hedge. Nothing could be seen of the house in the dark: it stood back from the lane in the middle of a wide circle of lawn surrounded by a belt of low trees inside the outer hedge.
Frodo had chosen it, because it stood in an out-of-the-way corner of the country, and there were no other dwellings close by. You could get in and out without being noticed. It had been built a long while before by the Brandybucks, for the use of guests, or members of the family that wished to escape from the crowded life of Brandy Hall for a time. It was an oldfashioned countrified house, as much like a hobbit-hole as possible: it was long and low, with no upper storey; and it had a roof of turf, round windows, and a large round door.

Crickhollow is a small settlement in Buckland, located a short way to the northeast of Brandy Hall.

Its most notable spot is an isolated house standing back from the lane in the middle of a wide lawn. It is surrounded by low trees inside an outer hedge, and there are no other dwellings nearby. This house is occasionally occupied with Brandybuck Hobbits who grew tired of the often crowded Brandy Hall.

Frodo Baggins was instructed by Gandalf to find a reason why he should leave Hobbiton (and the Shire) and meet him in Bree. In the summer of T.A. 3018, Frodo Baggins bought this house, as an excuse for leaving Hobbiton to the east.

While Frodo, Sam, and Pippin moved out, Merry and Fatty Bolger were already in that house, making preparations for their arrival. They were the only Hobbits who knew that Frodo would begin a journey to the east, so they made preparation for their departure as well.

On 25 September, Frodo and his company arrived at the lodgings, and met Merry and Fatty. The next day Frodo and his party departed for the Old Forest. It was decided that Fatty would stay at Crickhollow to maintain the pretense that Frodo was still in residence to hide his departure. Frodo spent only one night; at dawn they picked up the ponies from a nearby stable and rode to the High Hay.

In the early hours of 30 September three Black Riders came to the house in Crickhollow, but Fatty Bolger had already escaped. He had run to the nearest house and from there he spread news of an invasion, which traveled swiftly to Brandy Hall, and resulted in the rousing of the hobbits of Buckland.

After the War of the Ring, Merry and Pippin lived together for some time at Crickhollow. 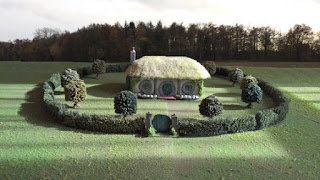 Crickhollow doesn't appear in the movie so I had to look elsewhere for inspiration.  The excellent Atlas of Middle Earth has the following map for Crickhollow that I will use for the interior: 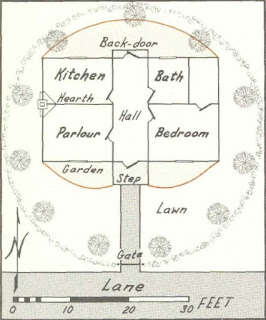 To begin with cut out a base that is roughly 24" by 24". This should be a curved shaped. You can adjust the size later. We will build the house on this base.  For the model I made I used a large cork sheet.  The base had a little section for a front and back garden as per the map above.

The walls are cut from foamcore using the following dimensions: 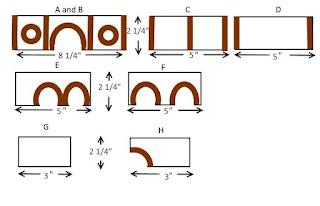 The diagrams above show where the doors and windows are so cut those out. They also display the layout for the planking which we shall add later.

Make sure your craft knife is sharp when cutting the foamcore to prevent tearing.

Download and print out these Shire Window Templates on over head projector acetate. Cut out the windows and glue them to the front of the walls.

The timber beams are made from balsa wood sheets of quite a thin size. I cut out strips that were just over 1/4” thick. When cutting I used a metal rule to get straight beams. The beams were then glued on the walls using PVA and left to set. Once set, taking a craft knife the edges were nicked and cut to age and weather them. You will also need to cut out circular window and door frames out of the same balsa sheets.

The doors were made from slightly thicker balsa sheets than that which was used for the timber beams. Before cutting out I lightly scored lengths down the door to represent the wooden planks the door was made up from. Two lengths of balsa the length as the door was attached towards the top and bottom and hinges and metalwork (such as the door lock) was cut out of thin card and glues in to place.

Start to assemble the walls as to the plan below. 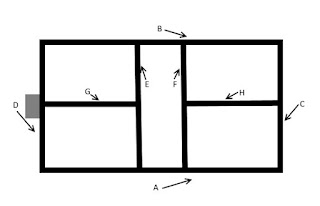 Tip
If you plan on making the interior playable as I have done, you will need to apply balsa timbers inside like you have done to the outside.
You will also have to make a bar and support pillars.

NOTE: Note you will only need to worry about this stage if you plan to make the interior playable.

Using a thin sheet of Balsa Wood cut out the floor and using a metal ruler and a ball point pen, score a floor board pattern onto this.

Glue this and the walls onto the base.  The gardens where then covered in PVA and modelling sand.

The roof was made from a block of polystyrene and cut to shape using the following dimensions: 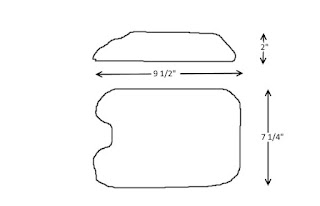 The roof was covered in a cut of static grass mat and then this was coated in PVA glue and lengths of cut field grass covered all over this. 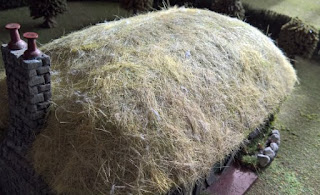 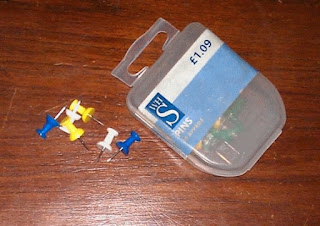 The pin itself was removed with pliers and then the pots attached to the stack using PVA glue. Once assembled the complete chimneys were glued to the roof.

Before undercoating on the exposed foamcore wall sections I thickly applied a layer of PVA glue to give the walls some texture during the painting stage.

Everything on the house was undercoated in black. If you plan on using spray undercoat one thing to be aware of is that the spray will melt the exposed foam parts of the foamcore. A handy tip is to first cover these parts in a layer of PVA glue and allow to dry, this can be done when applying PVA to the wall parts for texture. Also the windows will need to be covered in masking tape before spraying the undercoat so that no paint will get on the acetate.

The beams and wooden areas such as the doors were painted in Rhinox Hide and then using a small decorating paint brush the entire wall was drybrushed using Steel Legion Drab. This weathers and dirties both the wood beams and the walls themselves.

The front door was painted Caliban Green the drybrushed with Warpstone Glow.

Glue various clump bushes around the walls and around the porch posts.  Tufts of static grass where glued around the front garden and pins with the heads painted red where pushed in various places to act as plants.  In the back garden, bits of clump foliage were glued about to act as cabbages being grown there. Both front and back gardens were lined with ballast rocks. 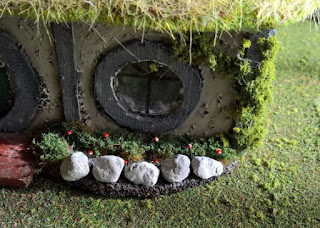 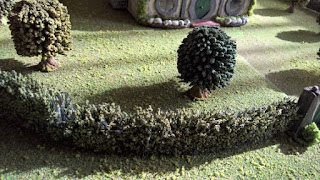 The front garden is the one that was made for Farmer Maggots' Farm. 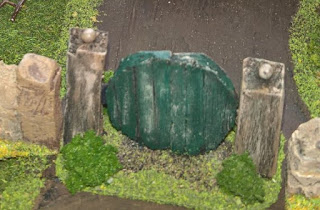 If you plan to detail the interior like I did, you can paint the floors grey and brown and then draw on flagstone and floorboards respectively. I made a stove from card and painted it for the kitchen, and a fire place for the lounge.  I had some resin beds that I purchased many years ago. For the rugs I found a suitable design online and scaled them accordingly and printed them out. 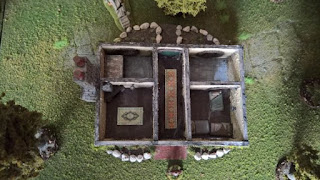 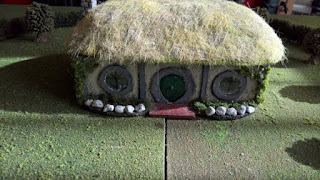 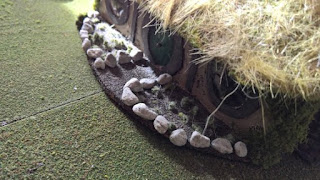 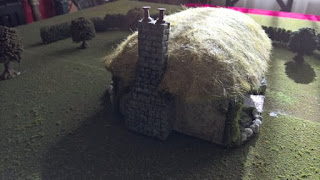 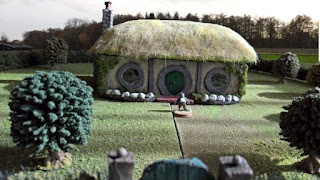