They turned down the Ferry lane, which was straight and well-kept and edged with large white-washed stones. In a hundred yards or so it brought them to the river-bank, where there was a broad wooden landing-stage. A large flat ferry-boat was moored beside it. The white bollards near the water's edge glimmered in the light of two lamps on high posts. Behind them the mists in the flat fields were now above the hedges; but the water before them was dark, with only a few curling wisps like steam among the reeds by the bank. There seemed to be less fog on the further side.

Bucklebury Ferry was a raft-ferry used as the second main crossing point of the Brandywine River from the Shire to Buckland, after the Brandywine Bridge (which is ten miles further north).

In this article we build the ferry, jetty and the small cottage seen in the movie.  If you have made either The Green Dragon or Bree Houses articles, the techniques in there will be used to make to building. 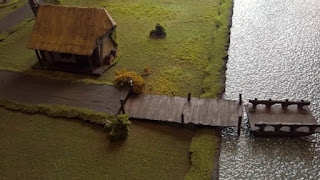 Because of the fast paced nature of the scene and the fact it is set in a misty night it can be hard to pick out details whilst watching the movie. Luckily Sideshow Weta Collectables produced a display piece of Bucklebury Ferry based up the movie designs so you can use pictures of this to get an idea of how the house, jetty and ferry actually look. 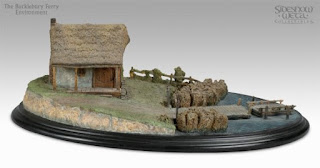 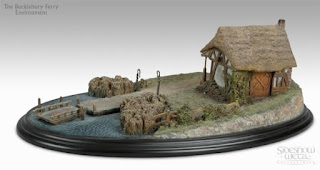 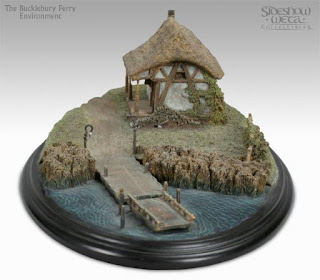 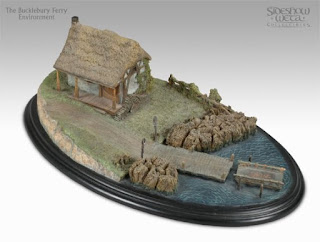 The jetty is made from a piece of balsawood that is 7" by 2 1/4". Planks are then scored into this using a ball point pen.

The balsawood can be a bit flimsy so underneath long strips of balsawood were glued to help strengthen the jetty. 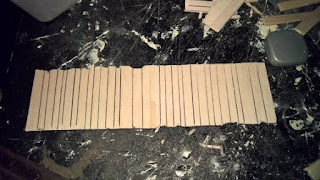 Two rods of balsawood 1 1/2" long were cut and glued to one end of the jetty.

Four more rods 1/2" long were cut and also glued to the jetty, two at the end and then two near the centre but nearer one side than the other (the side with the shorter rods).

Four more rods (two are 1/2" long and two 3/4" long) and then they are glued to the underneath parallel to the four short rods that were glued on the top of the jetty.

Over the years of wargaming I have amassed quite a good bits box, and so I dipped into this and found a lantern that I used for the jetty.

The ferry is made from a piece of balsawood that is 3 1/2" by 2 1/4" and just like the jetty a plank pattern was scored into it using a ball point pen. 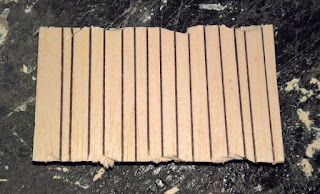 Underneath two thicker pieces of balsawood 3 1/2" by 1/4" and tapered off at the ends were glued.

The rails were made from the same thickness balsawood as the ferry floor and are 3 1/2 by" 1/2". Three half circles and two quarter circles were cut out of it and four small rods of balsawood glued in between the circles.

It was then painted in the same way as the Jetty. 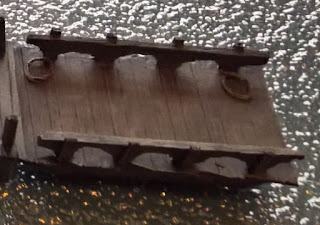 Cut out two of each of the pieces in the following picture using the dimensions shown. 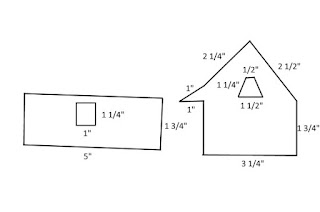 In one set of the pieces cut holes for the windows. Using the piece of foamcore that you cut out as a template cut out the windows from Car Body Repair Mesh. These are then glued in their respective holes.

For the doors both front and back, find a circular sized object of roughly 3/4" radius and used this to draw around on the piece of balsawood using a ball point ben.

Next cut pieces of thin balsawood and glue onto the house using the following pictures as a guide. 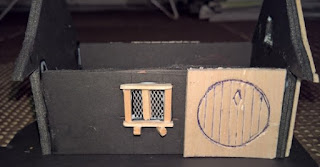 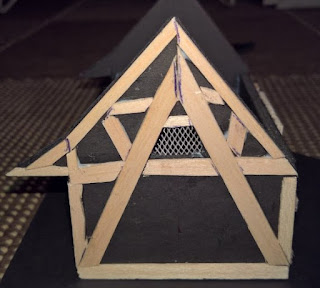 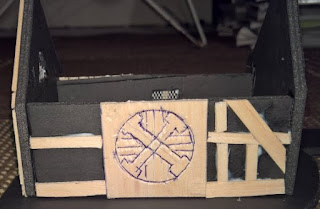 The chimney is made from Hirst Arts Mould #70 blocks. You will need 8 small, 2 medium, 2 large and 2 corner blocks to make the chimney. 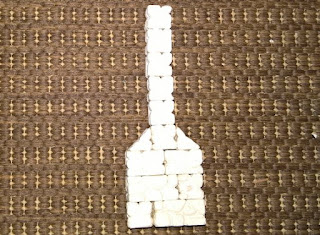 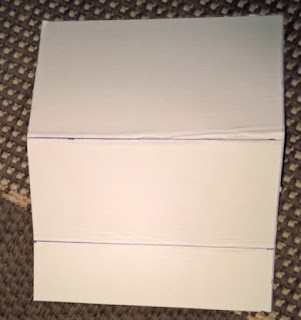 A piece was cut that is roughly using the dimensions shown in the image below and folded down the middle. This will be the end part of the roof and may need some tinkering to get right. This is then attached to the roof using tape on the underside of it. The roof is then glued to the main building. 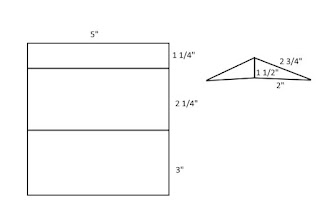 At this stage the building is glued onto a thick card base that is 6 1/4" by 4 1/4". A decking floor is then added using a piece of balsawood that is 4 1/4" by 1". The planks are scored onto this using a ball point pen.  Three rods of balsawood are then glued in place as the pillars of the porch area that are 2" long and angled to the same pitch as the roof at one end. 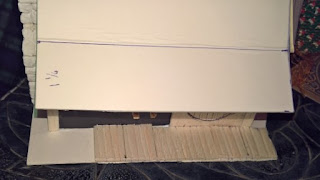 For the roof thatching I could of just used the fur and PVA method as presented in The Green Dragon article but I thought for this I would used a different technique.

Using decorators Caulk spread it out evenly over the roof.  Using an old toothbrush and starting at the bottom make 1" downward strokes. Start from the bottom and work your way to the top. Once complete allow the Caulk to completely set. 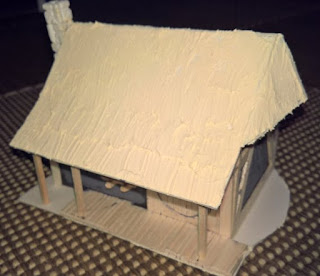 The walls were given a covering of textured paint. It does not matter which colour as the entire building was then undercoated in black. The doors, decking and pillars were basecoated in Rhinox Hide, then a drybrush of Mournfang Brown with a final lighter drybrush of Steel Legion Drab.  The rest of the wood work was basecoated in Rhinox Hide followed by a drybrushing of Steel Legion Drab and a final light drybrushing of Baneblade Brown. I also added a drybushing of this over the main walkway of the decking.

The chimney was drybrushed in Dawnstone then Steel Legion Drab and a final light drybrushing of Baneblade Brown.

The roof was basecoated in Rhinox Hide, then a drybrush of Balor Brown, then Karak Stone and a final light drybrushing of Ushabti Bone.

The base was basecoated using Rhinox Hide, and then a covering of Stirland Mud textured paint. It was then coated in PVA glue and green flock applied.

At the back of the house on the opposite side to the chimney, light green bush material was applied to the walls to act as the vine/bush that grows there.

I made some wood piles from cut off rods of balsawood that were then stained with Brown Ink for the bark of the logs. These were then glued using PVA to the base at the side of the house. 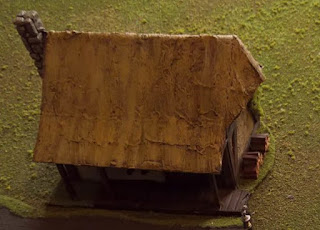 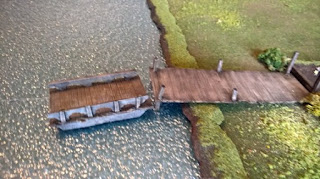 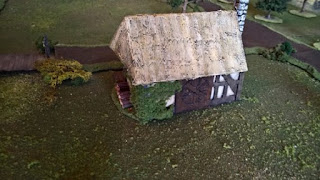 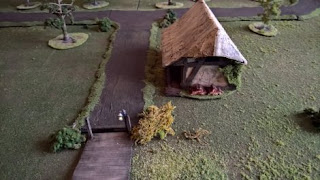 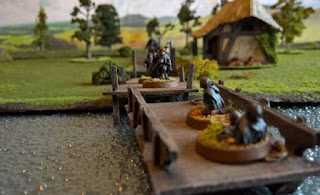 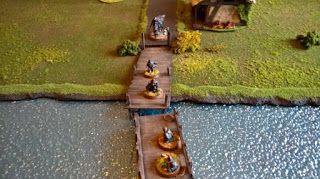 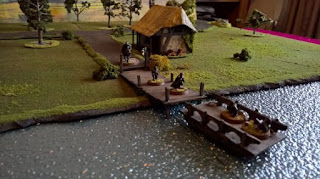 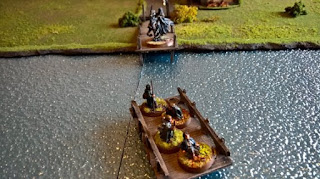