[i]Their feet disturbed a deep dust upon the floor, and stumbled among things lying in the doorway whose shapes they could not at first make out. The chamber was lit by a wide shaft high in the further eastern wall; it slanted upwards and, far above, a small square patch of blue sky could be seen. The light of the shaft fell directly on a table in the middle of the room: a single oblong block, about two feet high, upon which was laid a great slab of white stone. 'It looks like a tomb,' muttered Frodo. [/i]

Balin's Tomb was a mausoleum of white marble that was located deep within Moria on the eastern side of the Misty Mountains to the north of the great chamber of the Dwarrowdelf. This room was also the Chamber of Mazarbul, or the Chamber of Records. The tomb in the center, of the room, on which the beam of light fell, housed Gimli's cousin Balin. Upon the tomb the words Here lies Balin, Son of Fundin, Lord of Erebor were inscribed in cirth (rendered in Khuzdul: Balin Fundinul Uzbadkhazaddumu).

Over the years there have been many different variants of the Balin's Tomb scenario printed by GW the first being in the first edition of the rulebook back in  2001. This was played in on a 48" by 48" (4' by 4') which was way too big, there was also one in the Battle Games in Middle Earth magazine, one in the Mines of Moria set, one in the Fellowship of the Ring Journey Book and now one in the Hobbit SBG manual.  The current one is 24" by 24" which I still feel is too large. If you watch the movie scene it is rather claustrophobic when the battle takes place. The one that seems to capture this best for me is the Journey Book version which is 18" by 18". Of course there is nothing from stopping you from making it bigger or using the smaller version to play the scenarios with the larger layout.

This project also makes use of the terrain in the Mines of Moria boxset that was released years ago. If you don't own this and can not get hold of it you will have to make the pieces used yourself. 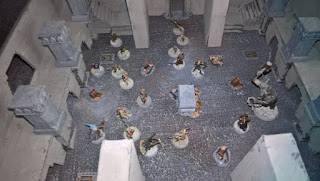 As with all movie based terrain projects its a case of watching the movie and pausing taking screenshots, and looking online and in books for other pictures. One I found particularly helpful for the layout was in Deciphers LotR RPG book for Moria: 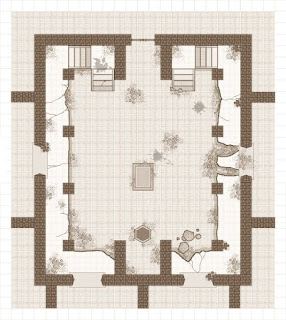 In the past I have had a few attempts at making Balin's Tomb, the first based on the 48" scenario and the next was 24" by 24". I was never very happy with either of these. 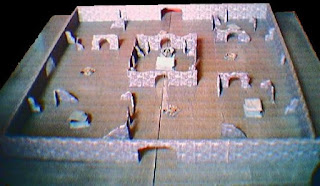 One thing I noticed whilst making my board is my cats love getting involved with Balin's Tomb. Here's a picture of Tom who is sadly no longer with us, climbing all over it. My new cats have done the same with the new board. 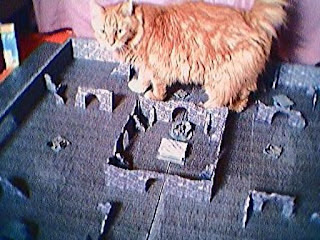 and now with my new cat: 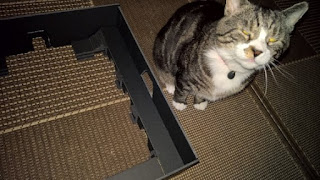 Not only did these not look very good they were also big and difficult to store. So I decided to make this modular so that they walls would be separate and not glued to a floor. I would set it up on my Cavern Gaming Boards.  Of course if you have the storage you can glue it all together on a base.

Out of foamcore cut four rectangles that are 18" by 5". You will notice that all are 18", where as normally I would mention about making two not as long so that it takes the width of the foamcore in to consideration when putting the room together. In this case looking at the map above you can see the room is slightly longer than it is wider so this will give us this without really deviating from the 18" by 18" scenario requirements. 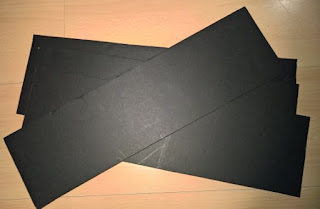 This is the easiest wall section to make. Take one of the basic wall sections and measure 9" in and draw a central dividing line.  Take the door frame from the Mines of Moria piece and lightly draw around this, including the base. You will then need to cut this out but making the doorframe hole slightly smaller when the frame is put in place it can be glued to the wall.  If you don't have the Mines of Moria boxset you can make the doorway in a similar manor to those in the Dwarven Hallways article.

The next stage is to make two sets of steps.  Start with a piece of foamcore that is 2" long and 1/4" wide. Cut another that is 2" long and 1/2" wide. Keep cutting out bits like this adding 1/4" to the width each time until you have six pieces in total. Glue these on top of each other so form a set of steps.

Next cut two more pieces of foamcore 2 1/4" long by 2" wide and then 2 1/2" long by 2" wide and glue these together to foam steps. This is then glued underneather the basestep on the opposite side of it that the top steps where positioned. You may need to refer to the picture below for reference. You will need to cut a piece that is 1 1/2" long by 1/2" wide to glue onto the front of the underside to make the steps look more solid.

Put these to one side for now as we won't glue them to the wall until the other wall sections have been made so that the positioning can be lined up.

Glue the doorframe to the wall but at this stage do not glue the base. 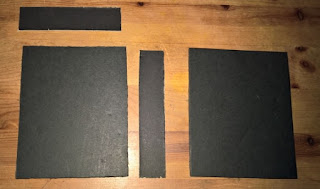 Take two pieces of the cut foamcore and one each of the card rectangles and glue these together. Do the same for the other pieces. Glue these to the front wall either side of the steps. 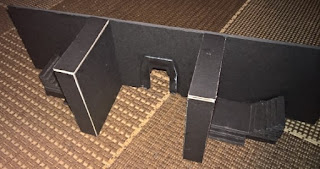 Both side walls are made in much the same fashion except for each piece is a mirror of the other.  Start by cutting a piece of foamcore that is 18" long by 2" wide. This will be the platform floor. Next cut a piece 18" long by the height of the steps made above. This will be the platform wall.  Take the platform wall and divide it in half then draw two lines 2 1/2" in from the left and right. Use these guide lines to draw and cut out three small doorways using the dimensions below.  Take the basic wall piece and divide it in half and use this line to draw and cut out a large doorways using the dimensions below. 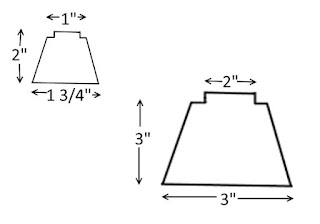 At this stage I glued the pieces together but it is recommend you do the detailing work now.  Foamcore allows you to score details in with a ball point pen so if you want extra detailing do so now.

Once dry you can cut out and glue some columns that are 1 1/2" wide (and as tall as the platform wall minus two thickness of foamcore) for the main pillar and 2" by 1/2" for the top and bottom. The end columns will need to both be halved in width. Shave a piece of the corner of the main pillar. 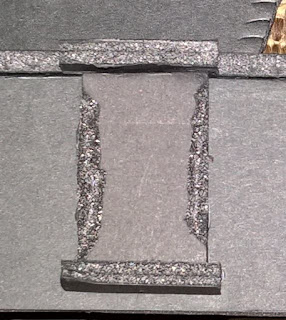 The back wall has a whole in it on the right hand side. Put the other wall pieces together and offer up the back wall. Mark out where you want this whole to go.
The platform will need to take in to account this hole so cut a piece of foamcore that is 2" wide and long enough to reach the hole. When cutting this make the end jagged. Do the same with the platform wall making as high as the side walls and as long as the floor you just cut.

I used pieces of off cut foamcore to block up the end of the damaged platform section as much as possible. I did the same for the right hand wall. 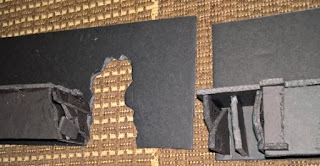 Cover both these sections in Modrock. 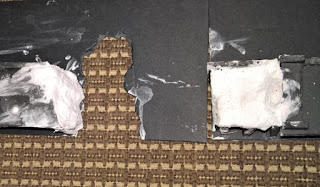 Next cut four pieces of foamcore 3" by 5" and out of thick card cut two rectangles 1" by 5" and two 1" by 3". Out of each piece of foamcore cut out a section 1/2" deep and the height of the platform wall of the back wall. 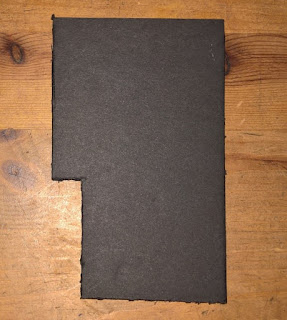 Take two pieces of the cut foamcore and one each of the card rectangles and glue these together. Do the same for the other pieces. Glue these to the back wall.  They should be position opposite the walls that were glued to either side of the steps of the front wall. 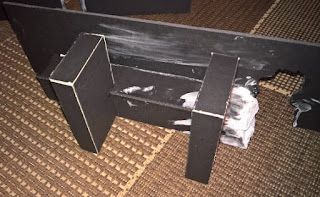 Coat any exposed foam areas in PVA glue. This will act as a sealant as we will be using spray paint later and the aerosol in spray paints will melt the foam.

I used black foam core and card so I don't need to undercoat all areas, but I did those parts that where not black such as the modrock and the edges of the card.

It was then drybrushed a dark grey (a 50/50 mix of black and Dawnstone), followed by a lighter grey (Dawnstone). 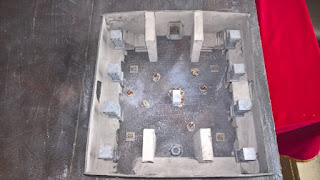 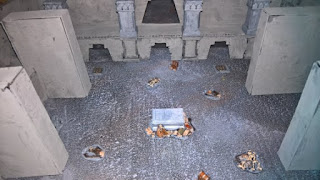 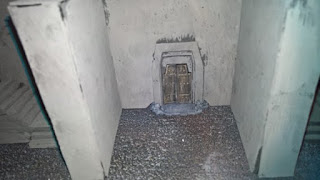 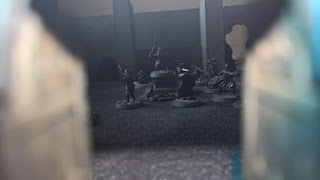 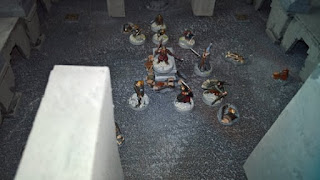 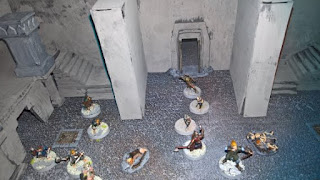